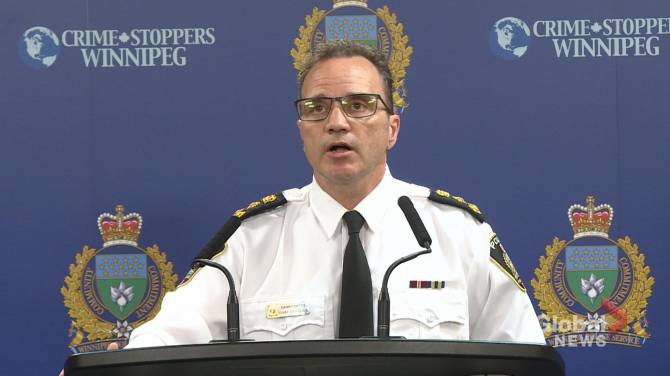 A dog will survive after being stabbed three times in a home break-in Monday that Winnipeg police called a “personal hate crime.”

A Winnipegger wrote on her Facebook page that someone broke into her home and vandalized her possessions, as well as injuring her dog, Petey.

“They destroyed the inside of our home,” she wrote. “Petey defending our home was severely injured. He was beat with a baseball bat and stabbed deeply 3 times with a butcher knife.

“Physically he will survive. Mentally will take time.”

Global News is not identifying the woman out of concern for her safety, but have reached out to her for comment.

In the photos, slogans were spray painted on walls and on property, including “Pakie lovers die” and other hateful messages.

Photos, mirrors and walls were spray painted, and possessions strewn around the home and smashed.

“The police have determined it to be a personal hate crime,” she wrote. “Please understand I am going to be off social media for awhile until I have ensured my family is safe.”

Winnipeg police confirmed the incident Wednesday, and called the spray painting, hateful messages and injury of the dog “very rare in Winnipeg.”

Cst. Jay Murray said the Major Crimes Unit is investigating. They said the incident happened in the Grassie area of Winnipeg.

The vandalization comes on the heels of spray painted walls and destroyed property at a Corydon Avenue restaurant last month. While police originally called it a hate crime, they later alleged the owners faked the incident.

The three owners of the BerMax Caffé were arrested and charged with public mischief, which involves intent to mislead and causing an officer to investigate an incident based on false information.