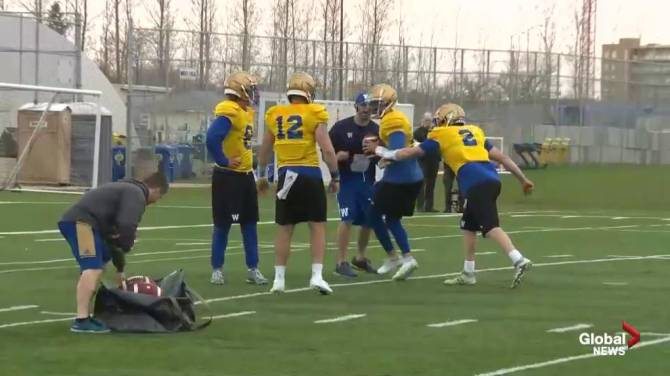 Just a day after releasing six players, the Winnipeg Blue Bombers trimmed another player off their roster.

The Bombers released defensive back Abu Conteh of Winnipeg on Tuesday. It’s the second time he’s been released by the club. The 23-year-old appeared in two games for the Bombers in the 2017 season, before he was released at the end of last year’s training camp, then re-joined the team mid-season. He ended up playing in 12 games in the 2018 campaign where he recorded five special teams tackles.

The Bombers selected Conteh in the third round with 23rd overall pick of the 2017 CFL Draft. Offensive lineman Geoff Gray is now the only player left from the 2017 draft class that’s still with the Bombers.

The move leaves the Bombers with 86 players on their roster, so there’s plenty of tough decisions still awaiting the coaching staff.

“It’s not just me trying to put the question off — we’re not sure how the roster is going to shake down yet,” head coach Mike O’Shea said.

“And that’s a good thing to know that you have that kind of depth in camp, and that kind of talent and competitiveness in camp that you can go down to the wire and have to make tough decisions.”

The Bombers play their second and final pre-season game on Thursday in Regina against the Saskatchewan Roughriders. Tuesday’s workout marked the final full practice session of training camp. Players have had over two weeks to showcase their abilities, but O’Shea will be putting more weight on how players perform when the lights come on.

All CFL teams have to finalize their roster by Saturday at 9:00 pm CT.