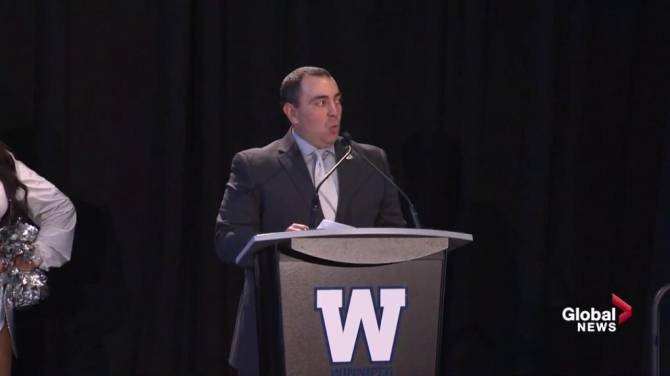 With the team’s preseason wrapping up Thursday night in Saskatchewan, Winnipeg Blue Bombers president and CEO Wade Miller is looking ahead to the regular season and the team’s home opener June 27.

“I do think that starting a little later in June is helpful,” Miller told 680 CJOB.

“Early in May and June is busy for everybody, and it gives everybody time – for fans to say, ‘hey, it’s football season’. We’ve had an awful spring, as we all know, in Winnipeg and Manitoba, so it’s nice to see the sun shining and people are starting to think about what they’re doing for the summer.

“We’re moving along quite well, not having our home opener til June 27… so we’re still pushing hard for the ticket sales. That home opener is going to be a great matchup against Edmonton. We also have the Reklaws, who are playing at half time, so a big country theme for that one. It’s a great game day experience.”

While the team is focused on the home opener, as well as its season-opening away game against the B.C. Lions June 15, there’s another event this summer taking place at IG Field this summer that is drawing a lot of attention from the football world and beyond.

On Aug. 22, the National Football League’s Oakland Raiders and Green Bay Packers will be headed north for a preseason game here in Winnipeg – a contest Miller said will help to raise the city’s profile as a sports hotspot.

“It’s a great opportunity,” he said. “Another large-scale sporitng event at IG Field.

“It’s an opportunity for NFL fans and CFL fans to come and see a once-in-a-lifetime kind of experience. It’s very positive, and it’s good from a lot of perspectives, for the Winnipeg Football Club and our city and province.”

Miller said the team’s fan service team has been fielding calls from as far away as B.C. and Quebec, inquiring about tickets to the NFL game, and he expects a lot of out-of-town fans to make their way to the city.

“You look at the exposure just the announcement got yesterday across North America. I think it’s elevating our sports town as we are, and we’ll show again what great fans we have of all sports.”