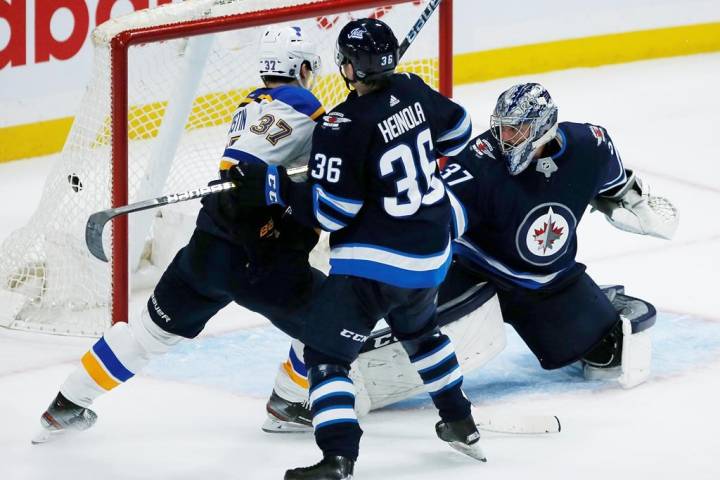 WINNIPEG – David Perron knew he wasn’t playing his best in the first period against the Winnipeg Jets on Friday. He changed his ways and it paid off.

The St. Louis Blues forward scored the late game-tying goal and then the winner 1:58 into overtime for a 4-3 exhibition victory.

“I started shooting the puck a little bit more in the second, shooting more in the third and that translated in two goals so that’s good,” Perron said.

He tied the game with 33 seconds remaining in the third with goalie Ville Husso pulled for the extra attacker. Gabriel Bourque had given the Jets the 3-2 lead at the 16:59 mark of the period.

The game-winner came after Perron spun around and took a shot that went off the post and past Jets goalie Connor Hellebuyck.

Jake Allen was in net for two periods for the defending Stanley Cup champions, stopping 18-of-20 shots. Husso replaced him for the third and made 10-of-11 saves.

Nikolaj Ehlers had a goal and assist for Winnipeg in his first pre-season game. Adam Lowry also scored.

Hellebuyck, also playing his first exhibition game, made 15 saves for the Jets (1-1-1)

St. Louis only had four shots in the first period compared to Winnipeg’s nine.

“In the second, I got a couple shots and I started feeling a lot better,” Hellebuyck said. “All in all, I liked the way I felt and I liked a lot of things in my game, but I don’t like losing. So I’m going to come back to the drawing board and get better.”

Kostin opened the scoring at 5:32 of the first period.

“Klim made a nice pass to me and I was lucky enough to bury it,” Edmundson said. “It’s nice to have my parents here and they could see that.”

His family is from Brandon, Man., about a two-hour drive from Winnipeg.

Ehlers did all the work for his goal.

After stripping the puck away from Blues defenceman Mitch Reinke at Winnipeg’s blue line, Ehlers used his speed on a breakaway to beat Allen between the pads 38 seconds after Edmundson’s goal.

Lowry tied it 2-2 at 6:53 of the second period when he tapped in the puck after an Ehlers’ shot had hit the crossbar and came out against Allen’s pad.

Jets head coach Paul Maurice wasn’t too surprised about his team’s play during the 6-on-5 late in the third or the 3-on-3 overtime.

“We’ve spent zero time on either of those (situations) and we won’t for another three or four days,” he said.

The Jets host the Calgary Flames on Sunday and the Blues are home to Columbus the same day.

This report by The Canadian Press was first published Sept. 20, 2019.